The Jewish Chronicle editor, STEPHEN POLLARD, portrays himself as a great defender of the Jewish community against all antisemitism. He has shown a sharp eye  for any antisemitism that he can try to link in some way to the Labour Party and its twice elected leader, Jeremy Corbyn. On Friday 27th July he was especially proud that three Jewish newspapers, of which his was the biggest partner (though with a significantly declining circulation), all published the same front page leader claiming that a Labour Party led by Jeremy Corbyn would pose an “existential threat to Jewish life in this country” in their print and online editions. I presume that as the senior partner in this venture, these words are his.

How would it look if an example came to light of a member of the Jewish community who faced a real existential threat from neo-Nazis, and the actions of Stephen Pollard increased the danger to him and his family, rather than acting to protect them?
What if the evidence showed that he had been privately asked by that family to take one small action that would mitigate this threat, and he refused point blank to do so? 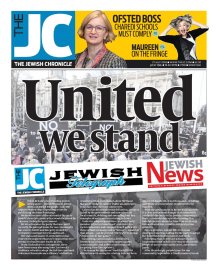 I know of such a case. It happened to our family. It was one of our sons who faced death threats from neo-Nazis. We did not go public at the time because we were worried that doing so would place our son at greater risk. In the light of Pollard’s claims about an ‘existential threat to Jews”, our son has decided to make this public in the last few days.

This is his testimony

“Back in 2011 the Jewish Chronicle ran a piece on me, which also included mention of my parents and their politics, and my childhood and education, none of which had any bearing whatsoever on the story. One of the consequences of them running this piece is that my parents and I were profiled by far right racists and fascists. Some fascists got hold of my parents’ address, and some details about all of us were shared on extreme far right forums like Stormfront. I received death threats, while my parents had to find ways to secure their home. In all cases these threats were explicitly linked to us being identified as Jewish, by far-right antisemites. At the time my parents and I wrote to the editor, Stephen Pollard, and requested, given these grave antisemitic threats, that the article be removed from the Jewish Chronicle website (it had already gone out in a print edition.) He refused and the article remained online.
“So excuse me when I can’t quite believe my ears, when you protest there is an ‘existential threat’ to Jews. The one time in my life I was profiled and violently threatened by known antisemites because I was Jewish, you refused to help. It turns out safety should only be guaranteed to the ‘right’ sort of Jews, and only when it serves your political agenda.”

Commentary: It was the Jewish Chronicle‘s editorial decision to report this case in such a way that it gratuitously provided details of other family members and their left-wing political views.  It was the decision of the editor, Stephen Pollard to leave the report online, after it became apparent that neo-Nazis were using it to make threats and incite acts of violence against us. In an email dated 14th August 2011 we wrote to Stephen Pollard, copied to two members of the Board of the Jewish Chronicle (Richard Burton and Jennifer Lipman), which said “under the circumstances we would request that you urgently remove the article from your website”. On neo-Nazi websites they had published photos of our son with the crosshairs of a target superimposed on his face. We had also pointed out factual inaccuracies in the Chronicle‘s report. Pollard fixed these and wrote an email back to us on 15th August saying: “You do not point to any other inaccuracies in our piece and I see no reason to remove it.” Neither of the Board members copied in responded to us.

Just a few weeks before this incident, a Norwegian neo-Nazi, Anders Breivik had massacred 77 people, mostly children at a socialist summer camp, having been inspired by online hate material. Pollard’s argument for keeping the material there was that it was factually accurate. And yet by doing so once he was aware of the threats, he was increasing the danger to us.

As a left-wing Jewish family, we knew that we were definitely not at one with Pollard politically. In 2006 he had written that in the “battle to preserve western civilisation” , the “Left, in any recognisable form, is now the enemy” (https://archive.li/Vp7Sr). We were aware that in the late 1990s and early 2000s he was a leader writer for the Daily Express and wrote sometimes for the Daily Mail at a time when both newspapers were being heavily criticised by anti-racists for repeated scaremongering stories against immigrants and refugees. Nevertheless we were and still are very shocked that the editor of the leading community newspaper could have behaved like this in response to a clear case of a murderous antisemitic threat against a member of the Jewish community.

Our terrifying experience tells us that Stephen Pollard, despite publicly claiming to be in the front line today of the fight against antisemitism, will only act to defend certain Jews, and he is prepared to leave others endangered. There are very few possible answers to the question of why he acted in this way towards members of his own community, and none of them are very edifying.

I really haven’t got the words to describe this cynical and inhumane attitude and his behaviour over this case, but perhaps those people who read this testimony will treat his utterances now with the contempt they deserve.